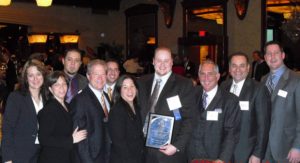 January 27, 2011 Michael Corkery and his wife Mara center stage at the LIBN “40 Rising Stars Under 40” Awards Gala surrounded by NYBKW Partners and Professionals. A record snowfall couldn’t keep the crowds away!

Congratulations to our very own Michael Corkery who was chosen by Long Island Business News (LIBN) to receive the prestigious 2011 “40 under 40” award, which recognizes outstanding members of the business community on Long Island who are under the age of 40. LIBN has been honoring people with this award since 1998. Hundreds upon hundreds of nominations are received annually. The competition is fierce — and only 40 are selected.

The Awards Gala was held on January 27, 2011 at the Crest Hollow Country Club, where LIBN President and Publisher, John Kominicki, officiated over the ceremonies. Despite a record snowfall that morning, a crowd of over 600 people jammed the main ballroom to recognize Long Island’s 40 Rising Stars Under 40. Among the attendees were past award recipients including Nassau County Executive Edward Mangano (Class of 2001).

As Michael Corkery graciously accepted his 2011 Award, he joined a select group of future leaders who have already begun to distinguish themselves in business, government, education and the not for profit sector. They have a proven track record of career success, are involved in mentoring and promoting their professions and find time to give back to their communities.

Michael J. Corkery, CPA, is a Senior Manager at Nussbaum Yates Berg Klein & Wolpow, LLP, a Melville based accounting, tax and consulting firm. Corkery began his career at Deloitte & Touché, LLP in 2001 where he honed his skills providing audit services to clients ranging in size from start-ups to large multinational SEC registrants. He was responsible for guiding billion dollar multi-national companies as they worked to meet a variety of financial reporting requirements, including IFRS.

Corkery served as the trusted advisor to CFOs, controllers, and directors as he helped them work through the implementation of new standards while keeping a watchful eye on the constantly evolving regulatory environment. His smaller business clients appreciated Corkery’s abilities to cut to the chase and make complex matters simple and easier to understand. He built a reputation as the go to person for manufacturing and distribution accounting issues.

Devoted to the importance of human potential and development, Corkery served as a mentor to scores of budding young professionals. He worked diligently to help them find their niches. He also counseled new hires on planning, progress, feedback, and other vital career development concerns.

After many years of serving enormous corporations, Corkery realized that his passion lay more with the entrepreneurial side of business. He wanted to now devote his career to being more hands-on and far more involved in assisting entrepreneurs grow their businesses. That is when he found Nussbaum Yates Berg Klein & Wolpow, the Melville-based accounting and consulting firm specializing in entrepreneurs.

Since joining Nussbaum Yates Berg Klein & Wolpow, Corkery has managed the audits of several of the firms SEC registrants and mid-sized private clients while broadening his skill set to include corporate taxation. He has become an integral part of the firm’s cadre of GAAP and financial reporting experts. Corkery has expanded his industry experience which now includes manufacturing, distribution, consumer business, telecommunications, not for profit clients, and has become a specialist in retirement plan audits.

Corkery’s expertise has guided clients through the implementation of authoritative guidance, financial statement restatements, and has helped clients meet regulatory requirements. He is a key figure in assisting clients who need to obtain financing in these challenging economic times.

Charity has been an important part of Corkery’s life since his involvement with Circle K, the Kiwanis Club chapter at Binghamton University where he graduated with a bachelor’s degree in accounting. Since then, he has organized teams and participated in various Long Island based events for such organizations as the American Heart Association, Junior Achievement, Toys for Tots, and the United Way.

These days, Corkery funnels most of his volunteer energy into his firm’s charity, the NYBKW Charitable Foundation. Founded to formalize the firm’s already very serious commitment to caring about others and with a mission statement to improve the welfare of men, women, and children, especially on Long Island, it has a theme of “Accountants that Care.” The Foundation affords Corkery many opportunities to give back to the more needy members of the Long Island community.

A licensed certified public accountant in the State of New York, Corkery is also a member of the American Institute of Certified Public Accountants and the New York State Society of Certified Public Accounts. He resides in Merrick with his wife Mara and their 6 month old twins. In his nonexistent spare time, he also co-manages and plays on corporate league championship softball and basketball teams.

Have a question or need assistance with your accounting and financial matters? We can help. Contact us to schedule a complimentary consultation to discuss your needs.